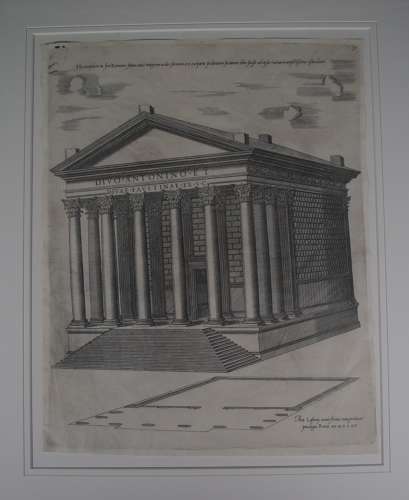 Inscribed in brown ink, right ,’7’.  Copper engraving .  Published Ant. Lafreri 1565.  Lettered upper centre:’Hoc templum in foro Romano situm cuius integram uides formam it si exparte sit dirutum sic tamen olim fuisse uel ipsae ruinae manifestissime ostendunt’.  Centre on facade: ‘ Divo. Antonino.et/Divae.Faustinae. Ex. S. C.’ lower right,’Ant.Lafrery aeneis formis cum gratia et/privilegio Romae an. M.D.L.XV’. Overall size in fully conservation grade mount and back with decorative v groove: 51.5cms x 62 cms;  image size floating within aperture: 335mm x 426mm.
The Temple of Antoninus and Faustina is an ancient Roman temple in Rome, which was later converted into a Roman Catholic church, the Chiesa di San Lorenzo in Miranda or simply "San Lorenzo in Miranda". It is located in the Forum Romanum, on the Via Sacra, opposite the Regia.  This very early engraving published by the great Lafreri with his signature script is in very good condition.  This engraving published most probably in the Speculum Romanae Magnificentiae (The Mirror of Roman Magnificence) Published and produced by Antonio Salamanca and Antonio Lafreri. The prints of the architecture and views of the city of Rome could be purchased individually or in albums. A prospective purchaser, pilgrim or traveller, would order his Speculum from a series of prints, as advertised by Lafreri in his catalogue of 1573, to be made up according to preference and means.

Antoine du Perac Lefrery of Besancon was born in France in 1512, and italianized his name to Antonio Lafreri after moving to Rome in 1540. In 1544 he established a business as an engraver and printseller, and began collaborating with Antonio Salamanca, an existing dealer, in 1553.  After Salamanca`s death, Lafreri continued to work on his own, and became the leading dealer in engravings in Rome until his death in 1577. Lafreri`s focus was as a dealer and publisher, rather than as an artisan, and is credited with being one of the first to issue collections of maps in bespoke atlas form.