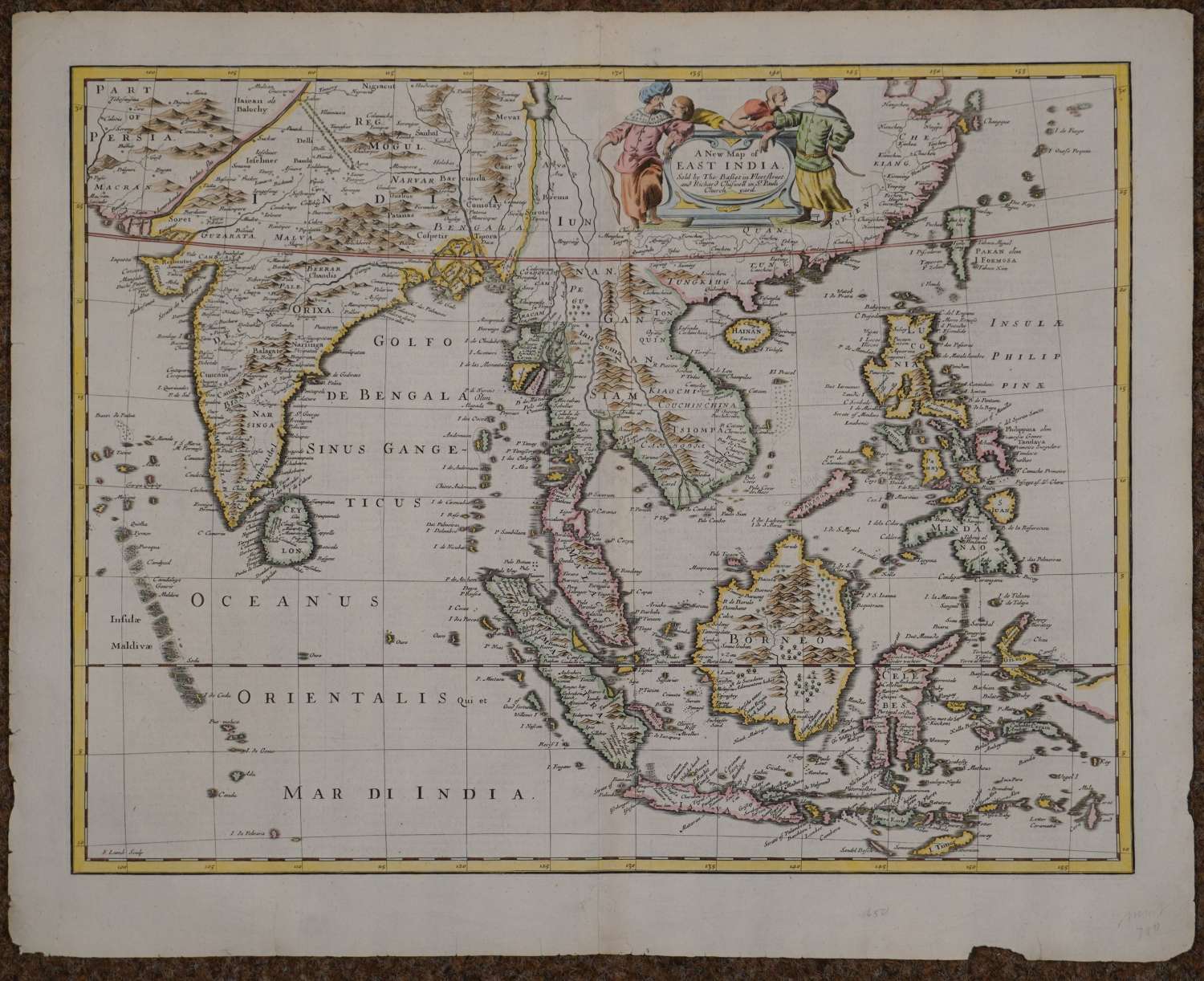 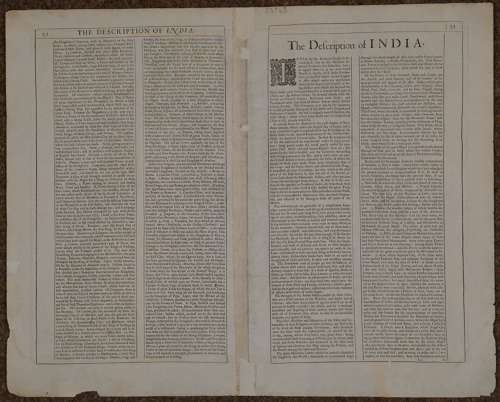 A New Map of East India by John Speed

Copper engraving by Francis Lamb; hand coloured.  Copper engraving with later hand colouring .  Overall sheet size: 55.8cms x 44.2cms; image size: 500mm x 378mm.  Repair top and bottom of centrefold and two small ones in centrefold invisible from front - see image of verso.  The maps from the Prospect appear less often than the county maps and this is a very well coloured,attractive map of a very desirable area in good condition.
The map covers Southeast Asia, China, Taiwan and part of India and was engraved by Francis Lamb and first appeared in the enlarged edition of Speed's world atlas in 1676.   The decorative   cartouche appears inland in China and is decorated with four men in Oriental dress.  The Maldives, Ceylon (Sri Lanka), India, China, the kingdom of Siam (Vietnam and Thailand), the Malay peninsula, Borneo, the Philippines, Sumatra, Java and the Indonesian Islands, and the partially mapped coastlines of western Papua New Guinea. Rivers, .  English text on verso describing the history and geography of the area.
The map depicts the long-held European assumption that all rivers in Asia had a common source. Here, it is the Chiamay Lacus, which gives rise to four rivers that flow south into Indochina.
Francis Lamb (fl. 1667-1701) was a London-based printmaker and map engraver, particularly known for his work on Speed's Prospect (he engraved four for it including this one), as well as maps for a number of seventeenth century English publishers, including Blome, Ogilby, Seller, Morden, and Philip Lea.
Until his late thirties, John Speed was a tailor by trade but his passion for history and map-making led him to gain a patron in Sir Fulke Greville, the poet and statesman, who found him a post in the customs and helped subsidize his map-making, giving him “full liberty to express the inclination of my mind”. He became aquainted with the publisher William Camden, whose descriptive text was used by Speed for most of the maps in his atlas “The Theatre of Empire of Great Britain” published most probably in 1612 although it bears the date 1611 on the main title page. The maps were engraved in Amsterdam by Jodocus Hondius, one of the foremost engravers of his time. Speed’s maps are unique historical documents of their time and the town plans featured on the maps are in most cases the first information we have of their early appearance. Their artistry has guaranteed the collectability of these maps in the centuries that have followed.